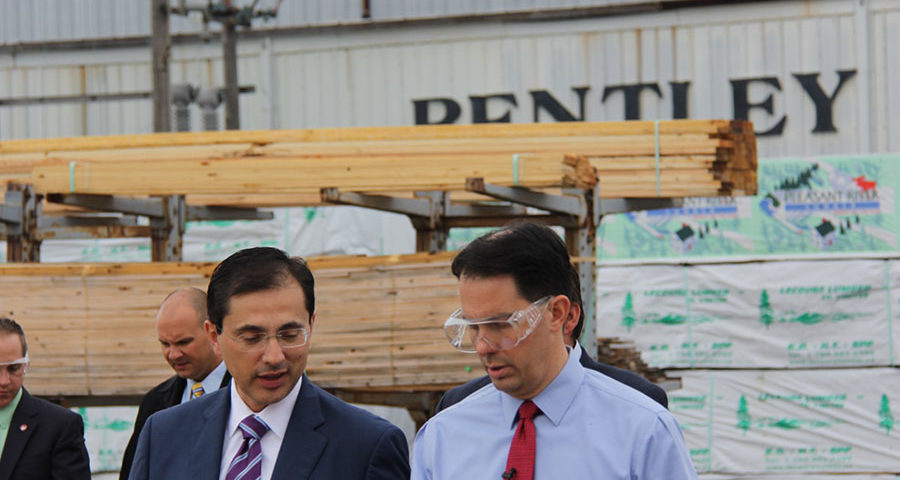 Milwaukee, October 7, 2016: Wisconsin Gov. Scott Walker touted the power of small businesses during a visit to Bentley World-Packaging on October 6 as part of a bus tour in support of the Job Creators Network Bring Small Businesses Back (BSBB) campaign.

“Small business is leading the way,” Walker said in a speech to the small group of invited local business owners. “The success, whether you’re here at Bentley or anywhere else, is overwhelmingly driven by not only the owner or the operator, but by the team that’s involved there. And you see it.”

Bentley hosted the private event in an effort to help raise awareness of issues facing local businesses – like overregulation, high taxes and a lack of access to capital needed to start or grow small businesses.

“We are a small business that faces all of the challenges other small businesses face,” said Todd Bentley, Vice President Corporate Strategy. “It’s hard. It’s hard to attract and retain employees, it’s hard to comply with all of the regulations we have. It’s on message to us.”

Bentley World-Packaging was one of the 30 stops on the 19-state tour designed to draw attention to and identify the major reasons for the ongoing struggles of American small businesses.

Alfredo Ortiz, President and CEO of the Job Creators Network, said that while this event showcased Republicans Walker and U.S. Representative Randy Hultgren (IL-14) – who recently introduced the Bring Small Businesses Back Tax Reform Act, the survival of small businesses is a non-partisan issue.

“This is truly an American issue,” said Ortiz. “That’s one of the reasons we started this campaign, because we found small business owners need that voice.”

That sentiment was echoed by Gregory Clement, President and Owner of Argon Industries, who introduced Walker to the group. Clement said fees, fines and other costs associated with regulatory agencies, the Affordable Care Act, and other government outfits are stalling small business growth.

“As a small business, we can’t pass these fees on to our customers,” Clement said. “Plus, our customers are global customers. We’re competing against China and Mexico. All of these costs add up and what it does is they shrink the margins of our company. It makes it hard to grow.”

Ortiz backed up Clement’s observations, adding that while small businesses account for half of all jobs and two-thirds of new jobs created in the United States, only 19% of small businesses plan to hire in the next year and the country is experiencing historic lows in new small business starts.

Hultgren told the audience his legislation would put more resources in the hands of small business owners so they can reinvest in their companies, increase productivity, grow business and create more, good-paying jobs.

“Small business is so important,” Hultgren said. “We need a tax system that really does make sense, that encourages productivity rather than punishing it. We need a system in place that gives some relief for the huge compliance costs. And access to capital.”

Ortiz and Hultgren both stated Wisconsin is a great example of how to create a small-business friendly environment, something Walker chalked up to concerted effort.

“We try to be sensitive to helping small businesses grow in this state, we’ve tried to rein in frivolous and out-of-control lawsuits, streamline the regulatory process, lower the tax burden on multiple levels,” Walker said. “For most small businesses, they are family businesses. Because the people who work at those businesses are like family.”